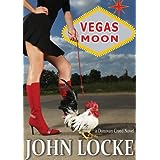 I lost my “indie virginity” to John Locke. Vegas Moon was the first book by an indie author that I ever read. I downloaded it from Amazon for the bargain price of 99 cents and I can tell you it is worth more.

Vegas Moon is a Donovan Creed novel. Creed is an assassin in the employ of the US government who has an implant in his brain. Anyone with the controller can fry his neurons. The highly creative Creed—who is a bit like Jack Reacher on steroids—sets out to track down the controller before one of his enemies gets to use it.

Although it is a bit of an improbable concept, Locke sells it with a great cast of characters and a great deal of humor—much of which had me laughing out loud. The opening chapters are written in a style which is redolent of the old gumshoe detectives (Mike Hammer et al.) which adds to the humor, however that style disappears as the novel unfolds, which is a shame. Also Locke pulls off the feat of making Creed likable, despite the fact that he is a certifiable psychopath and paranoid too.

One interesting aspect of the book was Locke’s use of bad language and sex: as I read it, I assumed that Locke was quite a young writer but he is not.

Vegas Moon is a good, quick read which I recommend to all my guy friends. To buy Vegas Moon, click here.

For info on John Locke, go to his website.

OK, got me interested, I’m going to check out Vegas Moon, I already am hooked on Jack Reacher

This site uses Akismet to reduce spam. Learn how your comment data is processed.

In another break from my usual routine, this is a review of a children’s book. Jumper is written by Rebecca Scarberry and beautifully illustrated by Terri Kelleher. Jumper is about a big red beach ball who Read more…

Life Sinks or Soars – the choice is yours by Rael Kalley

In my humble opinion, this is a real breakthrough novel for R. P. McCabe. The first thing I noticed about the book is that the style is redolent of my favourite US author of all Read more…