The Righteous by Michael Wallace 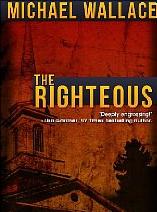 The Righteous is a murder/mystery thriller set in a splinter, polygamist  Mormon community in Utah. When a young woman, the third wife of an elder, is murdered, rather than report it to the police, the community ask a young Canadian from the same sect to investigate.

Jacob is a medical student with some forensic experience. When he is sent to look into the murder, he is accompanied by his seventeen-year-old sister, Eliza, for whom he must find a suitable husband.

As he starts his investigation, he discovers that the things he is being told are at variance with the evidence and soon finds himself enmeshed in a web of religion and politics as he starts to uncover a secret plot within the community.

What I enjoyed about The Righteous was the feeling of genuineness. In his bio, Wallace talks about having been brought up in a religious sect and his experiences transfer to the book. The characters are all strongly drawn and there are no bad people; everyone is acting in a way that they believe is righteous. Both Jacob and Eliza have a thin thread of doubt about their religion and its practices and their inner conflicts are sharp. Details of some of the secret temple rituals are also fascinating.

Michael Wallace keeps the tension building page by page in this well crafted thriller, which I strongly recommend.  A great read, it is worth way more than the $0.99 price tag. Click here to buy or try sample chapters of The Righteous

This site uses Akismet to reduce spam. Learn how your comment data is processed.

In another break from my usual routine, this is a review of a children’s book. Jumper is written by Rebecca Scarberry and beautifully illustrated by Terri Kelleher. Jumper is about a big red beach ball who Read more…

Life Sinks or Soars – the choice is yours by Rael Kalley

In my humble opinion, this is a real breakthrough novel for R. P. McCabe. The first thing I noticed about the book is that the style is redolent of my favourite US author of all Read more…